Starburst features a nostalgia-inducing arcade-like theme and offers only one special feature: the special expanding wild symbol with re-spins. It has an RTP of 96.1%, and it’s categorized as a low volatility slot, offering a maximum payout of 500x your stake.

Play for free at
pacasino.com or

Created by NetEnt, Starburst entered the slot scene in 2012, captivating players from all corners of the globe with its simple and entertaining gameplay. It continues to be a hit to this day, even earning itself the title of the most popular online video slot.

Starburst is available at various online casinos in the US for free play and real money play. If you want to give this slot a spin, make sure you read our detailed Starburst slot review for all the information you need.

Find the best bonus for Starburst

Starburst incorporates a five-reel, three-row layout with ten fixed paylines. You can produce wins both ways, which means symbols can line up from the leftmost reel to the right and vice versa.

Only the highest win per line pays out, but you can receive payouts from multiple winning lines.

Starburst is a blend of classic and modern gameplay, which is visible right off the bat. The theme revolves around dazzling jewels that echo a somewhat cosmic vibe. The dreamy background depicts space, with stars sparkling in the sky, while the symbols represent a mix of vibrant gems and classic slot symbols.

There are seven regular symbols: two high-value and five low-value. The high paying icons include a bar symbol and number seven, while the low paying symbols consist of yellow, green, orange, blue, and purple jewels.

Lastly, the main attraction is the wild, represented by the Starburst symbol. 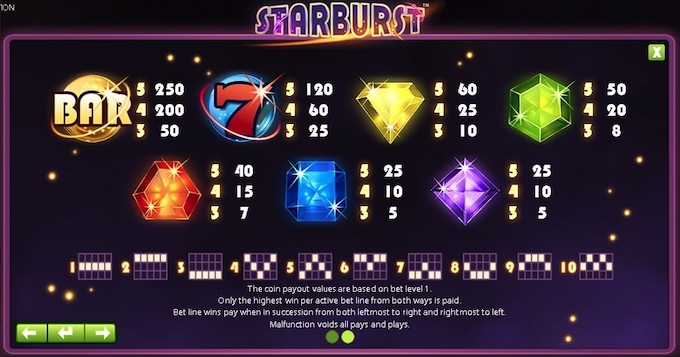 The betting range allows you to wager anything from $0.10 to $200 per spin. Additionally, you can select from ten bet levels and numerous coin values. If you want to increase your earning potential, you can place your bets at the maximum amount that your bankroll agrees with.

The slot also features an auto-spin option, which lets you place a selected number of spins that will play automatically. If you don’t feel like having to press the green button on every wager, this is a decent function to use.

Starburst has an RTP of 96.1%. This percentage describes the theoretical return to the player over a large number of spins, usually one million. It also has a hit frequency of 22.7%. Lastly, it’s a low volatility slot, which means you can expect small yet frequent wins with less risk to your bankroll.

There is no progressive jackpot in this game. However, you can win a maximum payout of 500x your stake, or 50,000 coins, through the special expanding wild with the re-spins feature. We’ll elaborate more on that below.

This is a simple slot that only offers one special feature. However, it’s a highly lucrative feature that can reward you with significant wins. Let’s investigate it below:

The wild symbol takes the form of a Starburst. It can replace any symbols on the reels to create a winning combination. In addition to this, it only appears on reels two, three, and four.

If at least one wild lands on the reels, it triggers the Starburst Wild feature. During this feature, wilds expand to cover the entire reel and stay in place while the other reels re-spin. If a new wild appears during a re-spin, it also expands and keeps its position along with any previously expanded wilds.

The Starburst Wild feature comes to an end when no more new wilds appear on the reels during a re-spin. You can trigger a maximum of three re-spins.

This slot incorporates top-notch graphics with vibrant colors and sparkling animations. It’s a beautifully crafted slot that’s easy on the eyes at all times. Additionally, it features a light, yet captivating soundtrack that fits the cosmic theme perfectly. 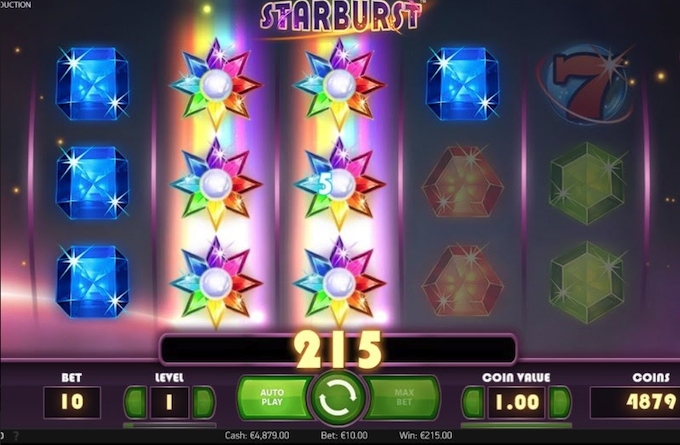 If you want to check out some other popular slots that are long-time hits at online casinos, take a look at these titles:

Since its release in 2012, Starburst has become a firm favorite among players all around the world. It may seem like a simple slot with no appeal at first glance, but that couldn’t be further from the truth. In fact, its simplicity is what attracts so many punters.

It features exceptional graphics, an enveloping soundtrack, along with one unique element: the special expanding wild symbol with re-spins. This feature can earn you a maximum payout of 500x your stake, which isn’t too bad for a slot that has low volatility.

If you want to skip the fuss and play a straightforward slot game, why not give the classic Starburst slot a spin?