Cash Noire is the detective noir online slot from NetEnt. The game transports players into the world of Detective Flint, and the game features an action-packed mystery symbol feature that gives you extra chances of winning. With an RTP of 96.06% and low volatility, this game is excellent for beginners and practiced players.

Read our Cash Noire review to learn how to put yourself behind the wheel of a hide speed chase towards big wins.

With five reels, four rows, and over a thousand pay lines, Cash Noir pays big. Matching symbols must be next to one another on at least three reels, going from left to right.

Like many other NetEnt games, it uses the avalanche mechanic, which means that combos disappear and falling symbols take their place. This only increases your chance to win.

There are also mystery symbols that change into standard symbols so you can rake in cash.

The magnifying glass pays the lowest, while the smoking femme fatal pays the highest. If you get matches in the Crime Zone, they go towards free spins. 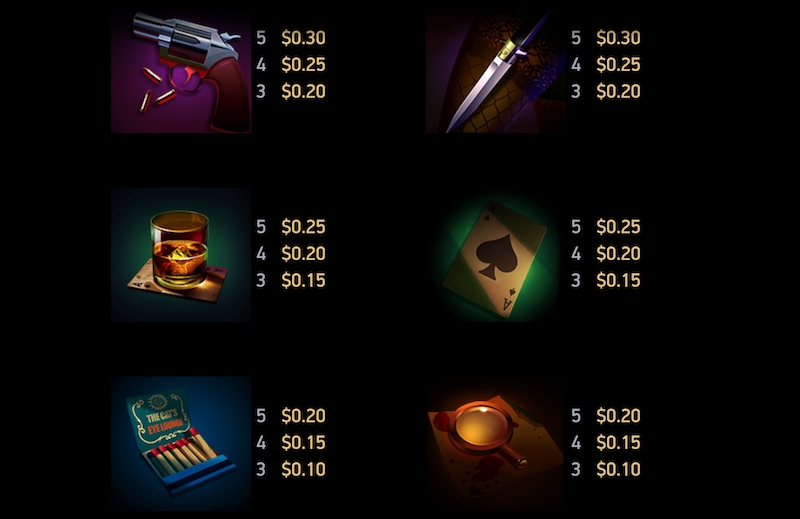 You can make matches with combinations of three to five symbols, and each icon has a different amount available to win. There are four symbols with face characters on them, two of them being femme fatal, one being a criminal, and one being Detective Flint himself.

These are the most valuable symbols.

The gun, ace of spades, and other objects pay a little lower than the face symbols. The game has the exact amount you can win on each character available on the paytable.

The minimum bet for the slot is $0.20, and the maximum bet is $200. With such a wide range of amounts, small wagers can mean significant wins. You can bet within your comfort zone and not worry about putting in too much cash.

Cash Noire’s RTP is 96.06%. It has relatively low volatility, so feel free to wager big. The game has a hit frequency of 21.87%, which means approximately one in five spins will win.

Cash Noire’s maximum win is 1033x your wager. That means that even small bets can lead to sizable payouts. With low volatility and such a high maximum win multiplier, taking a risk may mean huge rewards.

Like any other slot, Cash Noire wants its players to keep coming back. Several details are worth paying attention to, including the multipliers, mystery symbols, and many more.

In this next section, you’ll learn more about the game mechanics and ways to win.

Wilds, Respins, and Other Game Features

Cash Noire has a lot of unique ones. There’s the mystery symbol, which adds to the already sleek variety of detective-thriller images.

The avalanche mechanic keeps the wins coming,  and players can also build up with symbols in the crime zone towards free spins and even bigger bonuses.

While this slot doesn’t have traditional wilds like other NetEnt slots, the game has mystery symbols.  Found inside of silver bank vaults that fall on the screen, any of them found outside the red outlined crime zone will transform into a random symbol.

If they’re located inside the crime zone, it will clone throughout the pattern and fill it with random characters.

This means you don’t have to worry about spins that don’t appear to win anything at first.

This slot doesn’t have a respin feature, but that’s likely because the game itself doesn’t have a spin mechanic. Symbols will fall once initial matches clear away. Sometimes even mystery symbols fall into view.

NetEnt once again takes atmosphere into account when making games, and this one is no exception. Each exciting extra only adds to the 1930’s ambiance. The power meter, located to the left of the slots itself, is in a clue list style.

Each match of three to six symbols unlocks a clue. When all the clues light up, you collect free spins.

A small green car dashes around corners on the left side of the free spins board. Like the first version of the game, symbols inside the crime zone move the vehicle forward and raise the multiplier level.

You can even unlock more free spins with this method. When you’re on the last spot of the chase, you’ve solved the case and get a 10x multiplier.

From the loading screen, players enter a detective agency door. Once you hit continue, you enter the office, and the suspenseful bass music fills your ears. The ambient sound will likely make you apprehensive, and when matches disappear, the slight glimmer of success breaks the noise.

You can even hear Detective Flint’s voice in your ear as he tries to solve the case alongside you. In free spins mode, the music gets even more intense, making players feel like they’re chasing after a bad guy in the passenger seat of the pursuing car.

You even hear street sounds as you move farther up the power meter on the side.

In terms of graphics, the slot makes players feel like they’ve traveled through time. The classic cars, beautiful women, and enigmatic lighting put you behind the desk of a private detective.

If you like the crime-thriller theme, NetEnt provides several other games that share the aesthetic. Hotline and Hotline 2 take players to Miami in the 1980’s and packs the same action-filled punch.

The game’s atmosphere and high payout opportunity provide players the chance to fight crime with the hard-hitting Detective Flint.

The free spins mode and mystery symbols add extra suspense and winning opportunities to a game that’s good for both beginner betters and expert wage makers.

While we do wish that it was easier to get to free spins mode, NetEnt has hit it out of the park once again. Cash Noire proves that sometimes, crime does pay.