IGT’s Baywatch slot is an enjoyable 2017 title that takes you on a day out to the beach. It has 96.2% RTP and low-medium volatility, which you can play at many PA online casinos. Find out where you can play Baywatch below!

Baywatch has remained a player favorite since launching back in 2017 and can be played at the majority of online casinos in PA.

Here’s a summary of the principal elements for our Baywatch slot review.

Find the best bonus for Baywatch

Click on the links below to get started playing Baywatch at any of the following online casinos in PA!

The nostalgic Baywatch slot has five reels and three rows, giving you a total of fifteen paylines if you take the maximum bet.

The lines pay from left to right in fixed positions that you can find on the paytable.

Look out for the wild waves that can increase your chances of matching combinations.

Baywatch is one of the few slots that doesn’t have royal card symbols.

Instead, you have life floats, binoculars, dune buggies, a yellow speedboat, and a rescue vehicle on the lower end of the pay scale.

The more valuable images are the heroes Cody, CJ, Mitch, and Caroline.

The background consists of a beautiful beach with the blue sea.

Mitch is the highest paying symbol at 100 coins for five matches. Combine CJ with Mitch in the teamwork feature to give you 250 instead.

Here’s a visual representation of the paytable for our Baywatch slot review. 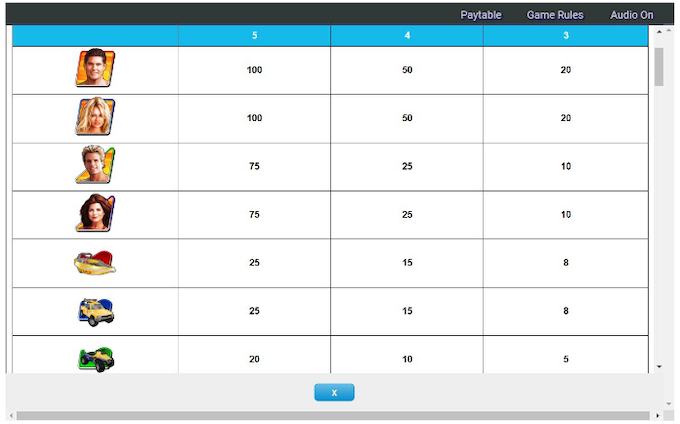 If you’ve discovered where to play the Baywatch slot in the US, you’ll need $0.20 as a minimum wager.

Fortunately, the casino game also suits high rollers with a maximum bet of $750.

The Baywatch RTP is 96.2%, ensuring that you receive good value for money when you win.

The low-medium variance will aid you with frequent medium earnings, but it’ll be more challenging to hit those substantial bonus features.

While there aren’t any jackpot levels, you can still win up to x3750.

You won’t achieve this feat in the base game alone, so you’ll need to receive some of the bonus elements.

Your best chance is a combination of free spins, wild waves, and teamwork features.

We were pleased to find several bonus features for our Baywatch slot review.

Besides the standard wilds, there are expanding wilds, mega wilds, free spins, doubles, and stacked symbols. 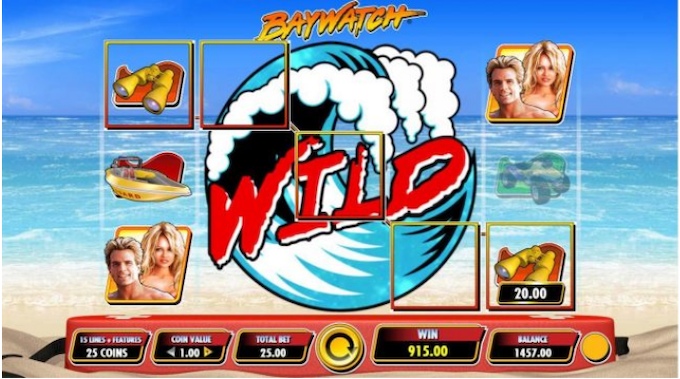 Wilds, Respins, and Other Base Game Features

The wild image features a cresting wave, which replaces any other symbol except the scatter.

Symbols can double up or stack, depending on the spin.

The teamwork element is available in both the base game and free spins round.

The first is the standard wild, which merely substitutes for another symbol.

Secondly, the tidal wild might wash across the screen from reels one to four, changing all images to wilds.

You can also find expanding wilds that take up an entire reel or mega wilds that cover reels two to four.

This gameplay mechanic teams up male and female symbols. Instead of receiving the regular payout, you’ll see an increase in your winnings.

We found that the teamwork feature arrives more frequently than the bonus round.

The lifeguard hut with the word ‘BONUS’ on it is the scatter. You only need one of these symbols on reels two to four to trigger free spins.

However, you’ll need to pick one male and one female image, which will determine how many spins you’ll receive.

The teamwork feature also comes into play here, an aspect worth praising in our Baywatch slot review.

You can multiply your winnings if you find more pairs, which is an excellent way of reaching that maximum payout.

If you’re a fan of the Baywatch TV series, you’ll fall in love with the graphics and sound.

The characters are good replicas of the actors and actresses with cartoon designs with the other images.

The background beach looks great, while the rushing tidal wave and helicopter animations were fantastic to behold.

You’ll hear the soundtrack from the show whenever you land a massive win. It will either be in the form of a short instrumental clip or the main chorus, complete with vocals.

The sound of the wave is also rather impressive. 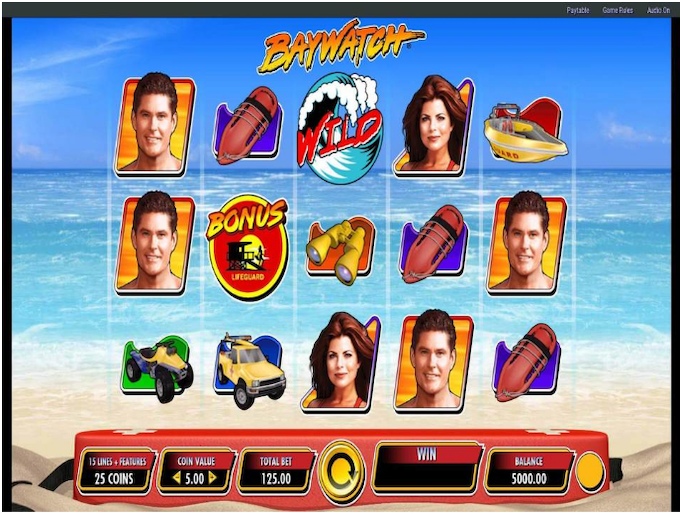 IGT has many other slots that reflect popular literary or movie titles.

For instance, Sherlock Holmes: The Hunt for Blackwood is a casino game that features the famous detective of Scotland Yard.

The developer based it on the 2009 film with Robert Downey Jr,  and it has an RTP of 94.15% with medium volatility.

If you want to stick with the Baywatch theme, you could try Playtech’s slot with the same name.

It hosts standard card symbols but also has the main heroes from the show.

The Baywatch slot provides the right combination of nostalgia and entertainment.

You’ll go back in time as the reel spins over the waves and sand with a large number of bonus features.

What’s more, the teamwork ability is a unique take on joining up for better rewards.

We’re also impressed with the 40 paylines and maximum payout of x3750. We only wish that there was a higher hit frequency for the bonuses.

However, the variety of wilds makes up for that.